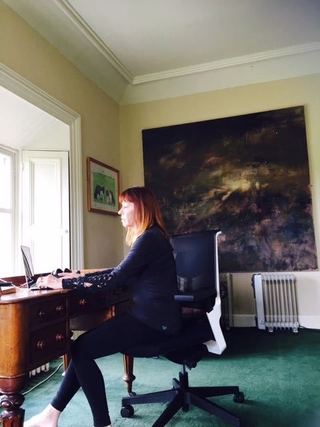 At work in the Butler Room, Tyrone Guthrie Centre

She is the author of seven books, including The Society of S,The Year of Disappearances, and The Season of Risks--first published by Simon & Schuster. The Ethical Vampire Series is now available as ebooks at Amazon.com. Lisa Maria's Guide for the Perplexed, a satiric novel, was followed by Lisa Maria Takes Off.

Hubbard's short story collection, Blue Money, won the Janet Heidinger Kakfa Prize for best book of prose by an American woman published. Her first book, Walking on Ice, received the Association of Writers and Writing Programs (AWP) Short Fiction Prize. Hubbard co-edited 100% Pure Florida Fiction, an anthology of contemporary stories set in Florida. Her short fiction has appeared in TriQuarterly, The Mississippi Review, Ploughshares, and other journals. Her fiction has been translated and published in more than fifteen countries.

Hubbard is a Professor Emerita of English at the University of Central Florida, where she received the College of Arts & Humanities' Distinguished Researcher Award. A former president of the AWP Board of Directors, she has received teaching awards from Syracuse University, Cornell University, the University of Central Florida, and the South Atlantic Administrators of Departments of English. She has been awarded writer's residencies at Yaddo, the Virginia Center for the Creative Arts, the Djerassi Resident Artists' Project, Cill Rialaig, and the Tyrone Guthrie Centre.

Susan Hubbard was a visiting artist in Summer 2016 at the Tyrone Guthrie Centre at Annaghmakerrig, Ireland. She's currently working on a new collection of short stories.